Adding Users in ShoreTel is among the most common tasks a system administrator will be expected to perform.  We suspect once the ShoreTel solution is fully deployed, you will generally not have to tweak Trunks, Switches and Application Servers, but you will always be handling requests from USERS to make changes.  These changes will run from adding New Users to changing the feature access of existing Users.    Most User options can actually be changed by the Users themselves but often they will call System Administration or the “help desk” and expect your  assistance.   ShoreTel Users have wide range of very rich features that they can configure to meet operating business goals.  The list of features ranges form “twinning” to “find me follow me”, call handling modes, and  “personal operators”.   There is also a range of options for customizing ring tones, wall paper, Communicator Tool Bars, and phone buttons.  Adding users is easy!  Understanding feature configuration options and how they interact with the ShoreTel system requires a bit more study.

Generally, ShoreTel phone extensions to not exist without an associated User.   This is a cultural issue as much as an architectural issue.   In  a CISCO deployment, for example, it is very possible to setup auto-registration and allow a range of new phone to plug into the network, register with the Call Manager, obtain an extension number and  be come a fully functional phone.   In the ShoreTel architecture a phone can register with the ShoreTel sever but it does not receive an extension number until a User account has been associated with the device.   These are modest but interesting differences in iPBX architectures.

We also have the concept of Class of Service and User Groups when we consider user configurations.   All systems generally have this concept. Again, in a CISCO deployment you would work with Partitions and Calling Search Spaces and they are virtually the same as User Groups and Class of Service permission containers.    ShoreTel has a very flexible User Group and Class of Service container strategy that is easy to configure, manage and assign.  Generally, we want to create individual User accounts, but we often want to make changes to a Groups of Users.  For this reason there is  a handy Batch utility for making it easy to make mass changes to your system configuration. 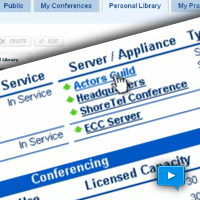 Version 12 of ShoreTel is all about Web Collaboration and enhanced Unified Communications functionality! For Example, ShoreTel has had an IM capability since Version 8, but historically you required a Microsoft OCS server to enjoy this feature. Not that Microsoft OCS is a bad solution, but it is really over kill for a functionality as simple as Internet Messaging! The ShoreTel Professional Communicator enabled the IM function as an integrated, single desktop client and many users wanted that functionality without having to grow the expense of a Microsoft OCS server. Enter the concept of a new ShoreTel Collaboration Server with all the bells and whistles disguised as an “appliance”! The New ShoreTel Collaboration Server, available with Version 12, provides a rich set of features that include Audio Conferencing, Internet Messaging, Desktop Sharing, Web Collaboration and Microsoft Outlook integration.

Not only is the functionality of this product astonishing and easy for users to manage, but the ease with which it installs is near magical. As an “appliance” the ShoreTel conference server installs as simply as installing any ShoreGear Switch!  Open Version 12 of Shoreware Director, it looks very familiar and is just as you would expect it to be from your earlier version experiences. You have to look very carefully to see the subtle but very powerful change that has been made. Prior to Version 12, you would find an administration navigation link to Switches and you would use this link to configure and deploy ShoreGear switches. This familiar link is gone and you will now find a new link entitled “Platform Hardware”.  Selecting this link enables you to “add a new switch” and the usual list of ShoreGear switches appears in the drop down menu!  Look a bit closer at the drop down list and you will see a new device or appliance: the ShoreTel Collaboration Server! The server installs, is managed, configured and upgraded like any Shoregear Switch.

Ever wonder how business was conducted before email and cell phones? Desktop sharing, IM and web collaboration are rapidly becoming the minimum daily adult requirement for Unified Communications and is now a “must have”  for business development in the Internet age.   There is a steady stream of dollars migrating out of the Transportation segment and into Communication segment of  your P&L  as businesses look to cut cost, increase productivity and shorten sales cycles.  Having these tools is no longer an option!  I suspect that the best and the brightest young talent coming into the work force will not only expect these tools, but will evaluate the potential for a company’s success based on the availability of these capabilities. The ShoreTel Collaboration server It is a fully featured solution for anyone that is looking for a cost effective alternative to GoToMeeting and other WebEx like products. Check it out the DrVoIP “tech tip” video clip for a sneak peak at all of this!

We have not had an update to our System Administration video series since Version 8.    System Administration had not significantly changed over the various new releases, so we did not feel the need to do an update.  Our Version 8 stuff is still relevant and useful no matter what Version of ShoreTel you are on.   We actually installed our first ShoreTel system on Version 3 Build 3.1.11100  back in the day when Shoreline only had Analog phones!  You might be interested to know that first system is still installed and we have continued to upgrade it over the last nine years!   We had to make a hardware change for the first time recently, but come on!  9 years on the same system!  That is amazing.   Talk about ROI!  We have watched with old blue Shoreline become the new Orange ShoreTel while steadily improving the functionality, scale, and architecture over the years!   Somewhere around Version 4, we grew IP phones,  but System Administration was relatively the same.   When we moved from the old Microsoft Access Database in Version 7 to the MySQL database in Version 8, System administration was still basically the same, but we finally cranked out a tutorial revision.     Now, as the solution matures development that was taking shape in Version 10 and 11,  we figure it is about time to do a new System Administration Series, so we are starting to crank out Version 12!

A note to DrVoIP fans and critics: occasionally I log in here and see comments that you have left.  Unfortunately, I turned auto comments off because it just became another place for Viagra advertisements and other Spam.   I do enjoy the interaction with those of you who find the blog useful, however, so please keep the comments coming.  Just Don’t try to post them here as the spam filter now kills all blog comments.   Please just send them on to Peter@DrVoIP.com!  Thank you all for your support and encouragement!

Software development is a process, not an event.  Having said that, from time to time, we have an event.  The release of a new version of software is such an event.  The software development process, however, continues.   The decision as to where to draw the line to separate one release from another is a complex interaction of competing goals.  The Marketing folks are trying to keep up with the competitive feature package from another vendor.   The support team desperately needs a patch for a nasty unforeseen system configuration that introduces an undesirable result and the software team has an aggressive agenda of its own making.

The list of new feature demands is unending.  Driven in part by user requests, marketing objectives and the pressures of other vendor releases.    If your product is built on Microsoft, clearly you are under pressure to stay compatible with any new releases they might make available to the market.  In fact, as it relates to ShoreTel, many people were seeking Windows 7 support when what they really want is Microsoft Office 2010 support!   Was it 64 bit desktop computers or 64 bit server software that the market demanded?  Do we do the Apple IPhone? Is that web based Communicator really needed in this release or can it wait?   Fixing the release of new features is one of the most challenging business decisions that companies have to make.

Generally companies try for two DOT releases per year and one major new release every year.  For ShoreTel, we generally expect a DOT one and a DOT two release.  For example we might have a Version 10.1 in general availability (GA) while we are beta testing a major release like 11.0.    We move to a GA release with the DOT and 11.0 becomes 11.1 available to all.   Currently, as of this post, ShoreTel is in GA on Version 11.1 while beta testing Version 12.0.  The GA Version of ShoreTel 11.1 has a host of exciting new features, but architecturally we are most interest in 64 bit server support; virtualization, Windows 7 Support, browser based Communicator  and distributed Databases.    Version 12 completes the Microsoft compatibility by supporting Outlook 2010.

Distributed Workgroups was made available in Version 10, which enables the continued operation of Workgroups on a distributed voice mail server (DVM) even if the HQ server failed.   This has some attractive options, but having an operating workgroup might be limited by an inability to have users log in or out of the workgroup.  Version 11 enables distributed database capability.  This means that in the absence of a HQ (e.g. read/write database) server, a user on a DVM could change their call handling mode; or a change in schedule from Off-Hours to On-Hours could be effected.   You have to chose one over the other and I would encourage you to choose the distributed database.   Best practice dictates that a Workgroup should be backed up by a Hunt Group that contains all the agents who make up the Workgroup.  In this way a failure of the Workgroup, still provides a call flow that reaches all Agents.  A distributed database, in my humble opinion, has higher impact.  IN a multi-site deployment, you will want to change call handling modes even if the HQ server is down.   This  combined with a backup hunt group, gets the job done more effectively.

The browser based Call Manger is yet another power new feature capability.   Now all those MAC users have an option!   I suspect that more and more call control will be built into browsers limiting our dependency on the various O/S issues.   Who cares if we support Windows 9 as long as we have a browser option!