In this economy, there are a growing number of mergers and acquisitions, or “marriage by shotgun”. When companies combine they have the challenge of integrating their data and telecommunications systems. For example, we have witnessed an increased demand in companies seeking technical assistance in merging ShoreTel systems. There are two basic options for doing this and the choice often depends on resource requirements and “dial plan” conflicts. To illustrate these options let’s assume Company A merges with Company B. Both companies desire the integration of their telephone systems if for no other reason than to enable the extension to extension dialing.

The first option is the traditional single image option. Assume that Company A will become the HQ Server and the other Company B will become the DVM server. To accomplish this, the database of Company B will be manually imported to the HQ server and a new site is created. ( Clearly, the WAN solution is in place and connectivity between the two companies exists). When you complete the database additions to the HQ server, adding all the new users, switches, workgroups, hunt groups and site details you are ready to convert the Company B HQ server to a DVM. You are going to have to reconfigure the site switches to point to the new Company A HQ server, but the process is manageable and you should achieve the desired result with limited downtime.

The second option is less obvious and many ShoreTel field installation technicians will not be familiar with the option. Out of the box, ShoreTel supports site based Prefix Dialing. In our example, we would leave both Company A and Company B with a HQ server. They would appear to be two separate systems. The use of the Prefix dialing, however, makes it possible to enable the extension to extension dialing between the systems. Through the ShorewareDirector web portal, you would select the Dialing Plan from System Parameters. The dialing plan would enable you to select a digit for extension dialing, with from 1-7 prefix digits. In our small example, we might make use of Digit 7 with a prefix of 2 digits, allowing us to create 99 sites.

When you exercise this option, you will see a new field appear in the SITES definition in the ShorewareDirector portal. Entitled “Extension Prefix” the field enables you to assign a two-digit SITE ID to each site you create. As you assign users to SITES, their extension numbers become the SITE ID + Extension number. Given that we have a WAN solution in place, we can then establish SIP Tie Trunks between Company A and Company B. The Trunk Group that defines the TIE LINE would have an OPX (off premise extension ) list that defines the extension range that “lives” at the other end of the TIE line. Company A might have a prefix of 77 and Company B might have a prefix of 78. Users in each system, even though they were previously defined with a three digit “dial plan” would now show 77-123 or 78-123 when you reviewed their individual USER configuration in Shoreware Director. Assume further, that both companies had similar “dial plans” meaning that they had the same extensions assigned in both companies! The extension prefix option working as a site ID, enables both companies to keep their extension numbers.  From within your site, you only dial the extension digits.   You dial the prefix digits + extension number to reach someone in a different site. 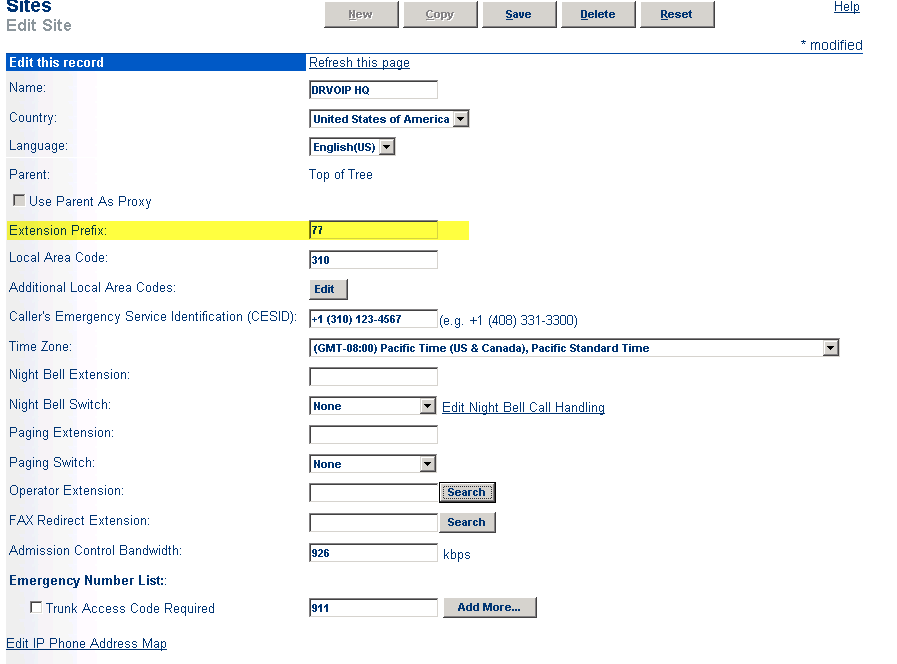 Arguments can be for, or against either option.A single image solution has real advantages in that there is a single point of administration and a single VM system.Others would argue that redundancy and increased resources favor the second option.Remember that currently, ShoreTel “Workgroups” are not a distributed service.The second option enables some workgroup survivability given an HQ server failure. Prefix dialing has a place in the integration of independent systems and can work to reduce HQ server work load while increasing resources and mitigating dial plan conflicts.